It is important to share back and forth between computers on a network, including both Linux and Windows computers. Between Linux systems About NFS-based File Sharing I have already made another description, but in order to make Linux shares that are accessible from Windows, or to access Windows shares from Linux, we now need to use other tools.

In this tutorial, we will walk you through this topic step by step, which we can follow with concrete, working examples.

The examples cover the following situations:

I use Debian 8, Debian 9, and Windows 7 on my home computers, so I can use these to show the Samba sharing settings in action.

Installing and configuring the package on Debian

Before getting started, it is always a good idea to upgrade your repository and packages (as root) to the usual apt-get commands:

This way, we can be sure that we can work with the latest software in our distribution.

Next, install the packages needed to run Samba shares:

The packages you install below are responsible for running "outbound" shares to be created on Debian (or any Debian-based distribution):

Of these, the libcups2 and the cups they are responsible for network printing if we want to share printers as well.

These are needed to handle "outside" shares on Debian:

Here is the samba-client (or smbclient) is clear, a cifs-utils and ensures the compatibility of file systems shared between different platforms (Linux, Windows, OS X, etc.).

After installing the packages, you will need to create your own Samba configuration file, which will be customized for your machine or network.

First, make a backup of the factory Samba configuration file to keep in case you need to (while still remaining root):

Then create your own (eg with nano editor):

And let's include the following:

This is the general default for the Samba server, where line items have the following meaning:

Of course, there are many other settings for the Samba server, but that is enough for it to work.

Save the file, then restart the Samba daemon a systemctl via:

So we've prepared our Linux system for bidirectional sharing. All we have to do is create our first share.

Let's create a directory somewhere we want to share.

For the sake of testing, I created a "Share" directory on my laptop under my user (with my own user) and contained two test files: 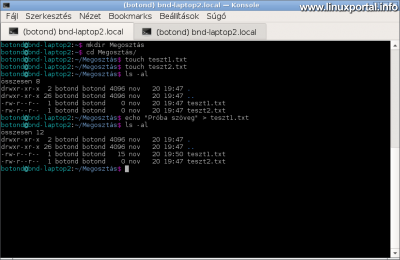 This is what I'm going to introduce to sharing now, of course, you can experiment with any library.

And add the following section after the basic settings above:

Save and then restart the Samba daemon:

You also need to create a Samba user to access this share. These users are stored in a separate database managed by Samba.

For this operation is smbpasswd command serves. So, create a Samba user (and a Linux user) and password:

Here, it is important to know that this command can only be used to create Samba users who already exist on Linux. So, if you want to create a new Samba user, you first need to create a regular user in the system using the useradd command. Otherwise, the smbpasswd command is "Failed to add entry for user <username>." gives an error message.

Accordingly, I created a Samba user for my user:

Here, too, I entered the same password as I used to log in, so I could avoid any confusion. Of course, you can enter a different password for Samba shares.

If you have forgotten Samba users, you can list them using the following command:

The pdbedit command manages the Samba user database so you can do a lot with your records.

We are now fully ready to access the network.

If we were in a situation where there is no other computer available to try out our shared library, then we can test Samba sharing from the same system. For this we use the terminal (with any user) smbclient command:

You will be prompted for the Samba user password and then enter the SMB prompt where we can proceed to share, etc. So if we have done everything so far, then we can see something like this in the terminal:

So we can be absolutely sure that our sharing is working.

The description on the next page and we'll be joining this sharing from Windows.