How to update our hold packages using the APT package manager

When updating our packages, it may be APT package manager hold back a few pieces. This is usually because a program sometimes undergoes changes that change the package dependency of the underlying software. In such cases, you would need additional packages, sometimes requiring replacement or removal of other packages. This also depends on the type of update, such as a simpler update, or a security update that requires you to remove other packages that are out of date or may pose a security risk to the software or to the system as a whole. In some cases, therefore, the normal mode packet update does not update such software, but APT leaves the user with this issue. In this brief description, we will look at an example of how to update our retained packages in this way.

Just yesterday I upgraded my laptop system when I stumbled upon this unusual thing that APT withheld quite a few packages from the update. Of course, such a case is not uncommon, because it does happen from time to time, but if you have already upgraded such retained packages, you may not have the right solution right away, so you need to look for it. And when it's all at hand, I thought I'd write a few lines about it to see if other people might find this information useful.

In this example, I was withholding Firefox packages. I ran the usual apt-get refreshing commands:

Then the output received the following sentence: "The following packages will be withheld:" 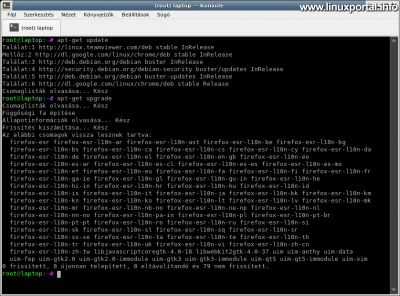 Then I checked the package information to see what versions are available on the system: 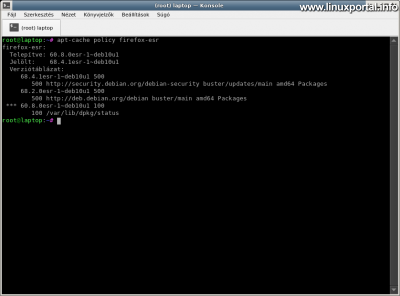 It also shows that the version of Firefox currently installed is 60.8.0, and that it is much more up to date, in this case version 68.4.1 in the Debian security repository.

The apt-get command is used to update withheld packages --with-new-pkgs switch. To run the update again: 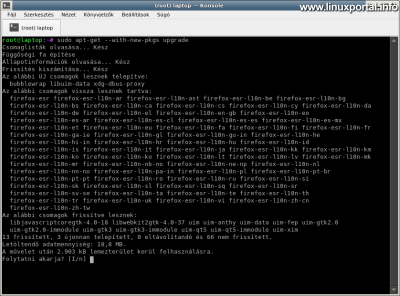 Normally, here you will select previously withheld packages to upgrade, but here's the interesting thing: Some newer packages have been released which were not updated in the previous round, and below we will see that Firefox packages will be withheld again. What's going on here?

A little research, that's it apt-get manual page looking for a description of the --with-new-pkgs option, I quote:

So the current twist here is that the switch does not remove any packages, so it does not perform this security update as (presumably) part of this update is to remove some obsolete packages. In addition, he added 3 packages, which in this case had nothing to do with the packages we wanted to upgrade, and added 13 others, which the first upgrade command did not.

So the switch made the necessary updates and added new dependencies, but our target program, Firefox, was not updated. Then how can we update this too? Another option is the apt-get command.

After you have built up the necessary dependencies in the system using the previous command, run the apt-get install <package> command:

Here should be a list of all packages withheld. In this case, firefox-esr will add all its add-ons for installation as its own dependencies. So here's just one piece here: 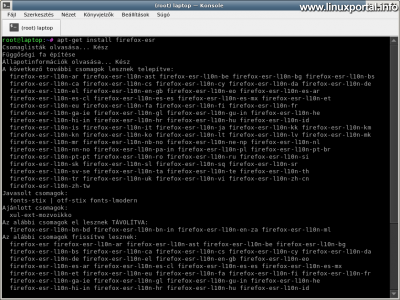 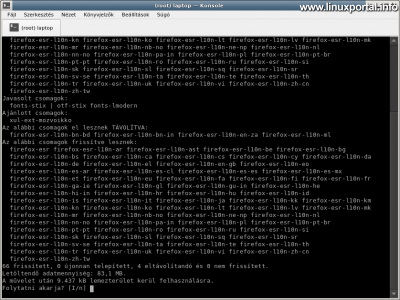 The second image shows that 4 items have been removed from the list. So, the previous --with-new-pkgs switch probably did not perform this security update, as it would have had to delete 4 packages that the switch does not execute, according to the manual page, so it skipped the task.

Here, of course, everyone applies the command to packages appropriate to their own situation ... 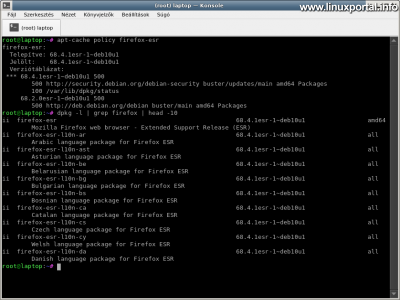 And here it appears that there is the latest available version of the Firefox packages, which comes from the "debian-security" repository containing debian security updates. As well as looking at the first 10 items in the package list, you can see additional versions of Firefox.

In hindsight, this is a very simple operation, but when you first encounter it, you have to go a little further. So I hope it will be useful to others.

So, normally, it is enough to update withheld packages with the -with-new-pkgs option, but if that update involves removing other packages, apt-get install <list of withheld packages> command. Applying them one after the other will make you more confident that you will perform the upgrade. Of course, there are even more drastic methods, such as apt-get dist-upgrade Run (distribution update) function when rebuilding the entire system dependencies and updating every package, but this really only needs to be used in the last resort if the previous methods fail.